Justice McCabe was honored for his three-decade long career as one of the most distinguished public servants in government and the judiciary in Nassau County. As a member of the Ancient Order of Hibernians, Justice McCabe has a history of promoting Irish history and culture and has supported and advised the Board of Directors of the Irish-Americans in Government for many years.

Thomas McKevitt was presented with the 49th Annual George M. Estabrook Distinguished Service Award on Saturday, December 5. The award is in recognition of his dedication and support of the Hofstra Alumni Association. He is a graduate of both Hofstra University (B.A.) and Hofstra University School of Law (J.D.). Mr. McKevitt is among a group of eight distinguished alumni who were presented with the award at the dinner.

The Hofstra George M. Estabrook Alumni Association, Inc. is focused on identifying and recognizing distinguished and outstanding alumni through award programs and establishing scholarship programs for deserving students. George M. Estabrook was one of the founding trustees of Hofstra University, mayor of the Village of Hempstead and president of the Estabrook Construction Company, which built many of the buildings on the Hofstra campus as well as throughout Long Island.

Michael Sahn was invited to speak on advanced SEQRA issues for professionals attending the Suffolk County Planning Commission’s Autumn Planning Conference on Wednesday, October 21. The session addressed recent SEQRA case law. This advanced course was part of an annual training conference that was attended by planning and zoning board members, town and village board members, planners, architects, environmental specialists and other land use professionals. 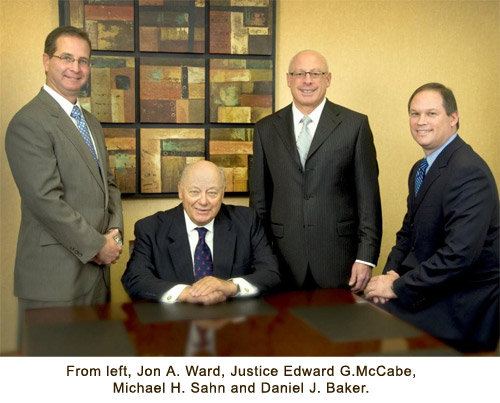 We are distinctly honored to announce that former Nassau County Supreme Court Justice and Administrative Judge of Nassau County Edward G. McCabe, has joined the firm as Special Counsel. Justice McCabe’s distinguished career dedicated to public service spans over three decades. He is one of the most respected judges and public servants in the history of Nassau County. His depth of experience and knowledge will be a tremendous asset that will benefit our clients and our entire firm. Click here to read Justice McCabe’s profile.

The firm is proud to recognize Miriam Villani’s leadership role as Editor-in-Chief of the New York State Bar Association Environmental Law Section’s prestigious quarterly publication, The New York State Environmental Lawyer. Under her leadership, the journal will feature substantive articles on developing issues in environmental law, and columns covering ethics issues, EPA and DEC updates, as well as recent administrative and judicial case updates. We invite you to call Miriam to learn more, or click here to visit the website.

Under the leadership of Jon Ward, Esq., the firm has won a $1 million verdict on behalf of a commercial property owner whose property was contaminated by gasoline constituents that originated from an adjacent gas station. After a lengthy non-jury trial in the Suffolk County Supreme Court, the gas station owner has been ordered to pay damages to the firm’s client for cleanup costs, environmental consulting fees and legal fees incurred by the client.

Designated as a historic structure and property in 2005, the summer home of Booker T. Washington sits on a bluff overlooking the Long Island Sound, dangerously close to an eroding 60 foot cliff. With the guidance of Michael Sahn, the owner is formulating plans to move the historic house to another location on the 1.4 acre property and build a new home on the site, once water and erosion issues are resolved. Click here to learn more.

The Firm Serves as Co-Counsel for Major Yaphank Project

The firm is proud of our role as co-counsel to our longstanding client, The Beechwood Organization, the major partner in a real estate development company designated by Suffolk County to build an important new development in Yaphank with 1,000 units of affordable housing, a destination sports and entertainment venue and a research park powered by solar energy. The project is to be built on land owned by Suffolk County. The project also includes a hotel, restaurants, office and retail space and a variety of housing choices. To read more about the project, click here.

Tom McKevitt was invited to speak on ethical considerations for planning and zoning officials for the New York State Conference of Mayors 2009 Planning & Zoning Summer School, held in conjunction with the Association of Towns, the State of New York and the New York Planning Federation. Tom spoke at the Long Island program, which was held at the Town of Islip’s Town Hall on July 21st. These programs are also being offered in Albany, Syracuse, and Williamsville, New York. To learn more about the programs and the New York State Conference of Mayors and Municipal Officials, NYCOM, visit http://www.nycom.org.

The firm congratulates Mayor Ralph Suozzi, who received a 2009 Smart Growth Award from Vision Long Island for the adoption of the Glen Cove Master Plan, which lays the groundwork for future of the City, including multiple redevelopment projects from the waterfront to the downtown.

The creation of a Master Plan is a major undertaking that requires expertise in many different disciplines. The firm was pleased to serve as Special Counsel to the City of Glen Cove, providing legal guidance and counsel concerning land use and zoning issues as the City developed its first Master Plan in more than 50 years. The comprehensive Master Plan provides the City of Glen Cove with a clear vision as the City moves into the future. We look forward to our continuing representation of the City as elements of the plan are implemented.

Miriam E. Villani participated as a lecturer in a seminar entitled The Redevelopment of Contaminated Property: New York State’s Brownfield Program and Beyond on Wednesday, June 10 at the Melville Marriott. The program was co-sponsored by the Environmental Law Section and the Committee on Continuing Legal Education of the New York State Bar Association. Please call our office if you would like to speak with Miriam about the seminar.

The Firm Welcomes Miriam E. Villani To The Firm

The firm is pleased to announce that Miriam E. Villani, a highly accomplished and respected attorney in the field of environmental law, has been named a Partner with the firm. Ms. Villani brings outstanding expertise and knowledge to our firm, and we are honored to have her join our practice. Ms. Villani’s experience in environmental law will significantly benefit our clients, particularly since environmental law has such importance in the areas of land use, real estate and commercial transactions, municipal law and brownfields redevelopment. Click here to read her attorney profile.

For the third year in a row, SWC&B greatly enjoyed participating in the Marcum Workplace Challenge, which brought thousands of participants from professional practices and companies together for a spirited afternoon and evening and benefits local Long Island not-for-profit organizations. Our men's team moved up in the rankings from last year - we had an outstanding performance, ranking 20th out of a total field of 109 men's teams, with a finish time of 1:16:17. The men’s team finished in first place in the Legal Challenge among all law firms participating. The firm's overall men's and women's team came in at 20th place, with a time of 2:15:06. Congratulations to all who participated! 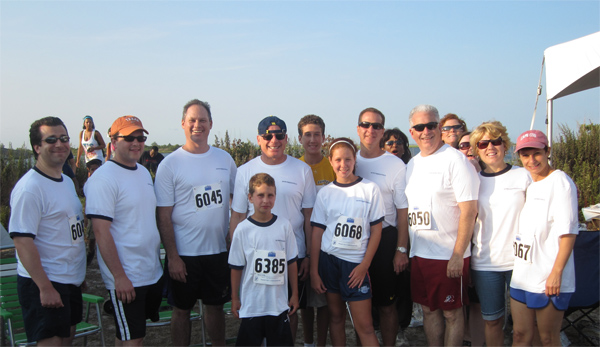 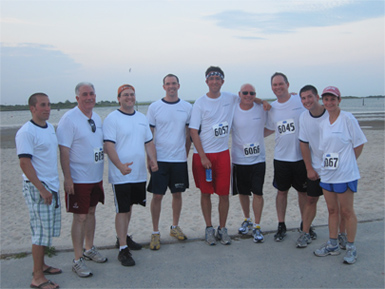 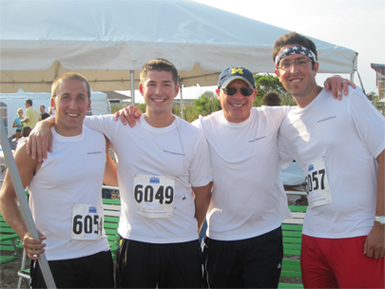 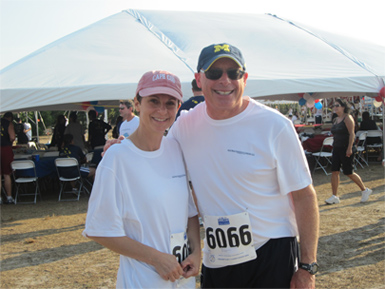 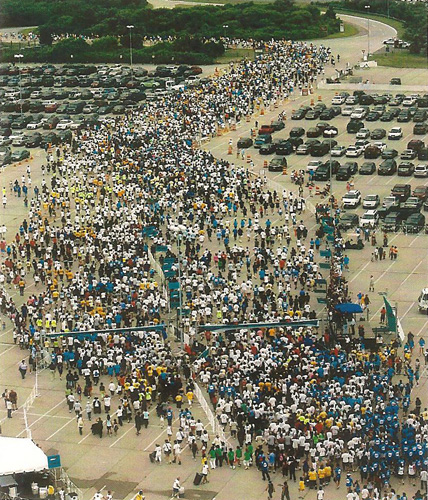 The firm greatly enjoyed participating in this summer’s 2009 Marcum Workplace Challenge, which brought more than 6,000 participants from 196 professional practices and companies together for a spirited event. Our men’s team had an outstanding performance, ranking 29th out of a total field of 103 men’s teams, with a finish time of 1:20:32 and our overall men’s and women’s team came in at 32nd place, with a time of 2:29:38. Congratulations to all who participated