We are proud that Judge McCabe has been appointed director of the Paralegal Studies Certificate Program at Hofstra University. His long and distinguished career as a member of the judiciary will be of great value to the students attending the Paralegal Program. To read the Justice's complete biography, click here. 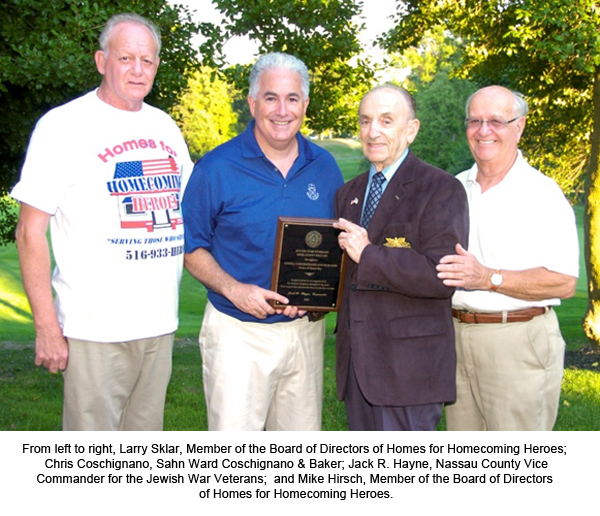 Chris Coschignano was recently honored by the Jewish War Veterans Gier Levitt Post 655 during their first annual golf outing, held to support Homes for Homecoming Heroes. Homes for Homecoming Heroes was created to build homes that will be sold at cost, through a lottery system, for any members of the Armed Services who were involved with the Iraq and Afghanistan conflicts.

Syosset Chamber of Commerce Recognizes Chris Coschignano for his Support 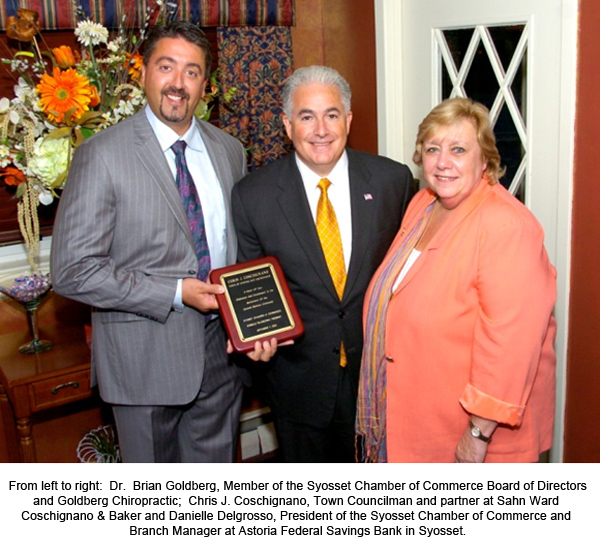 Chris Coschignano is dedicated to supporting the growth and development of businesses in Syosset. He was recently honored by the Syosset Chamber of Commerce, along with Town of Oyster Bay Supervisor John Venditto. 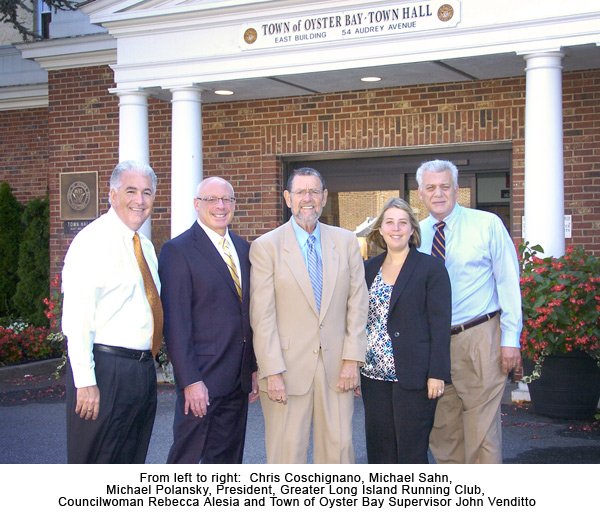 We are pleased to be the Presenting Sponsor of the annual Supervisor Venditto’s 5K Run, held on Saturday, October 16 that kicks off the 27th annual Oyster Festival. Supervisor’s Venditto’s 5K Run is conducted under the auspices of Town of Oyster Bay Department of Parks, with race management services provided by the Greater Long Island Running Club (GLIRC).

The course is set in the hills of Oyster Bay, which is challenging for the runners and part of the Supervisor’s 5K Run’s appeal. Participants are invited to run or walk the course, and each entrant will be presented with a high quality commemorative sweatshirt. The Run is a part of the USA Track & Field – Long Island Grand Prix of Long Island road races, with outstanding post-race refreshments, a raffle and awards five deep in age groups from 14 and under through 85 plus. Special awards will be presented to the top male and female finishers from the Town of Oyster Bay as well as the oldest and youngest finishers who are Town residents. For entry forms and details, contact Mike Polansky at GLIRC at 516-349-7646 or visit www.glirc.org.

Joseph B. Rosenberg, Counsel to the Firm, moves to Our Uniondale Offices

The firm is pleased to welcome Joseph B. Rosenberg to our expanded office, which now includes a large suite of offices and conference rooms on the seventh floor of The OMNI building Mr. Rosenberg concentrates his practice in estate planning, wills, trusts, probate and related areas. He maintains an additional second office in midtown Manhattan. We are very pleased that Mr. Rosenberg has joined us. To read his complete profile, click here.

The firm is proud to sponsor an exciting series of live music performances that take place every weekend in July and August at the Village Square in the City of Glen Cove. Downtown Sounds is an annual free concert series produced by the City of Glen Cove and the Glen Cove Downtown Business Improvement District (BID) that provides a “back to downtown” environment that celebrates the City’s diverse ethnic community while encouraging Long Islanders to take advantage of all that the City’s downtown has to offer. To learn more, visit http://www.downtownsoundslive.org.

We are pleased to announce that Michael Sahn and Dan Baker have been appointed to serve as Co-Chairs of the Real Property Law Committee of the Nassau County Bar Association, and Tom McKevitt has been appointed as Vice-Chair of the Municipal Law Committee. The Real Property Law Committee considers current developments relating to the practice of real estate law, and the Municipal Law Committee reviews trends and developments concerning all matters of municipal law, including zoning and land use planning, elections, employee relations, open meetings law, and preparation and enforcement of ordinances and local laws.

The Nassau County Bar Association enjoys a membership of nearly 6,000 private and public sector attorneys, judges, legal educators and law students, making it the largest suburban bar association in the country. Association members participate in more than 40 substantive law committees and a variety of programs which strive to confront the challenges and changing needs of the legal profession and the community at large.

On Friday, May 21, the Hon. Edward G. McCabe was joined by family members and members of the firm to celebrate the dedication of his judicial portrait. A formal ceremony took place at the Courthouse on May 21, attended by members of the firm, family members, members of the judiciary, and colleagues. The portrait of Justice McCabe now can be seen along with more than 85 portraits of retired justices along the walls of the courtroom that date back to the early 1900s. Click here to see the item that appeared in the New York Law Journal. 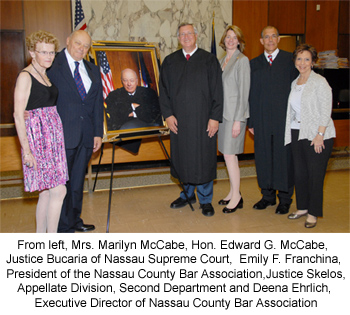 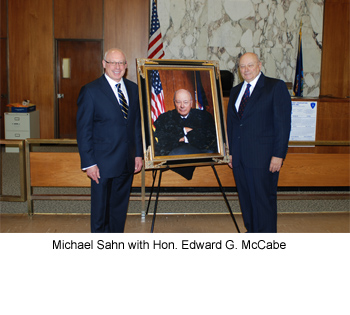 We were pleased that the New York Conference of Mayors (NYCOM) named The City of Glen Cove the first place winner of a Local Government Achievement Award (LGAA) for its Visual Simulation Ordinance. The firm served as The City’s Special Counsel in the drafting and adoption of the ordinance. The awards recognize innovative projects or programs that improve the quality of life for their municipality and are presented every spring during the NYCOM annual conference. The ordinance mandates the use of visual simulation submissions to accompany applications for large scale development projects. Major Ralph Suozzi and The City of Glen Cove received the award from NYCOM and award co-sponsor Empire State Report during NYCOM’s 101st Annual Meeting, held this year in Saratoga Springs, New York. To learn more, click here.

The Firm was a Proud Sponsor of Every Woman Matters: A Walk for Women and their Families to Support the Katz Women's Hospital at North Shore-LIJ

The firm was a proud co-sponsor of a 5K walk (3.1 miles along the boardwalk) at Jones Beach Park, Field 5, on Sunday, May 16 to benefit the new Katz Women’s Hospital and Women’s Health Institute at North Shore-LIJ. Participants walked or ran the 5K route, and enjoyed a visit to the Healthy Living Showcase and Exhibition. For more information on the walk, visit www.everywomanmatterswalk.com.

Miriam Villani completed her second issue as Editor-in-Chief of The New York Environmental Lawyer. In coming months, the journal will be available in an electronic edition as part of the Environmental Law Section’s efforts to prevent pollution. In the electronic version, the new column entitled “Open for Discussion” will incorporate a link to the Section’s blog to encourage online discussions among Section members on matters of interest.

On behalf of the City of Glen Cove, the firm has written a new ordinance that mandates the use of visual simulation submissions to accompany applications for large scale development projects. With the adoption of the ordinance, Glen Cove has become the first municipality in the United States to require the submission of visual simulations with certain land use applications. The visual simulations will dramatically improve the ability of zoning and land use officials to consider the impact of projects on the community. This ordinance exemplifies the progressive and forward-thinking approach of Mayor Ralph Suozzi and the City Council in planning the City’s future. Read the full story in Newsday.